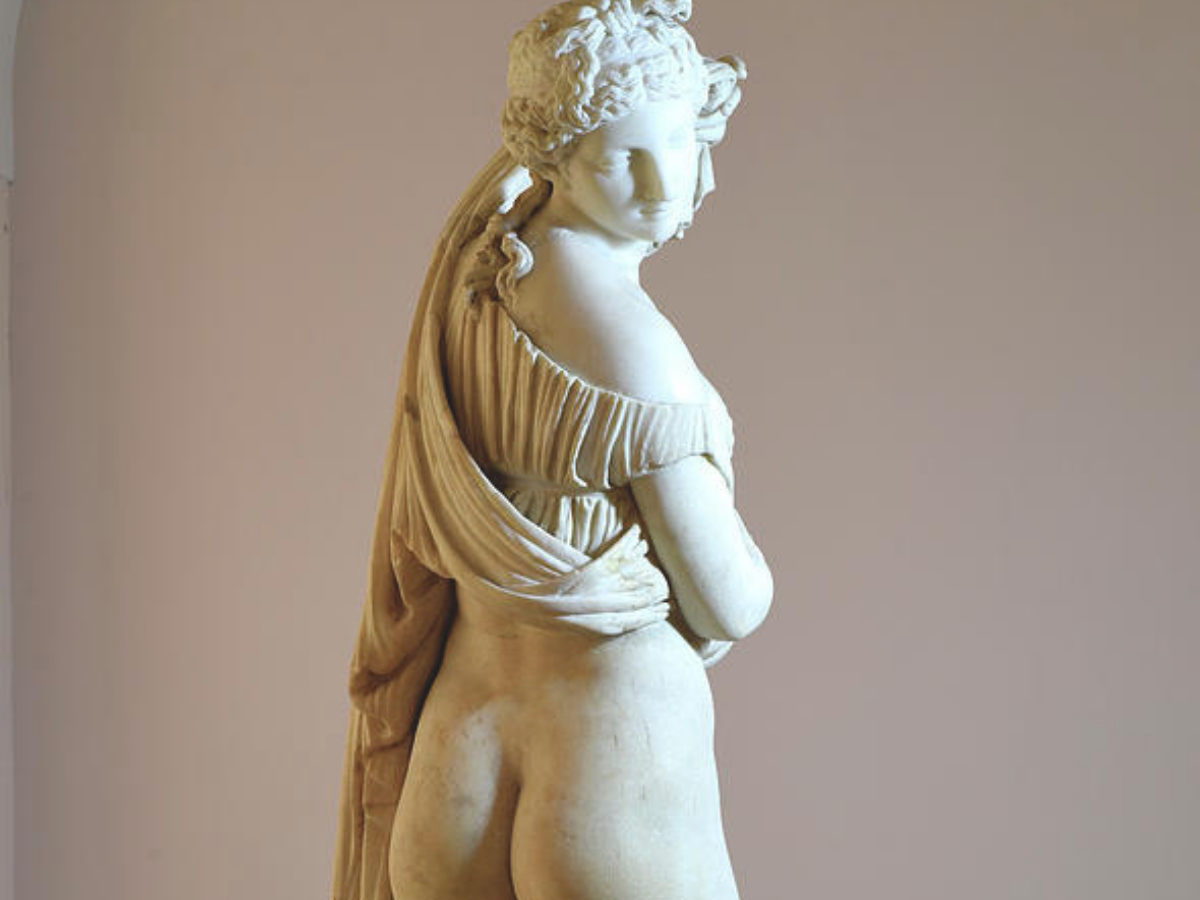 A Brief History of Clitoral Representation in Art

Excerpted from The Sweetest Venus: A History of The Clitoris by Sarah Chadwick.

Penises of course are visible everywhere in the Western cultural world. They’re as visible as breasts.

Penises of course are visible everywhere in the Western cultural world. They’re as visible as breasts. They’re in art galleries and on church ceilings, and public buildings and parks are littered with statuesque penises, peeing into fountains, flopping on the scrotum of beautiful marble Adonises, or living dangerously hanging around heroic men of action like Theseus and Perseus as they slay minotaurs. Take five minutes for a Google Images search on Adonis statues or peeing statues, and you’ll be amazed by their sheer numbers and familiarity. (And look out for Theseus on the Archibald Fountain in Sydney’s Hyde Park—don’t you think his weenie would have been safer in a jockstrap?)

We don’t feel embarrassed when we see these statues or images, or flinch if we’re with our grandmother, or mind when children point at them or comment. It becomes a small step from the flaccid penises of art to conversations with children at appropriate times and ages about what happens when they get big. They know what a penis is, and they know that generally men have them. The visual record lays the way to dialogue. But where do you start with the clitoris? If we’re not talking about the clitoris, and there are no images of her, how on earth do we expect young women to learn about their anatomy? How does their site of sexual pleasure get endorsed? How will male partners know about the clitoris? Or ask questions about her? Or, importantly, treat her as an equal?

It  wasn’t always this way, as we’ve seen with prehistoric sculptures. Lodged in the walls of some 11th- and 12th-century buildings in Europe are a surprising and joyous number of carvings of vulvas on display—the so-called Sheela-na-gig girls . The carvings portray women young and old, plump and skinny, with vulvas of various sizes and shapes. The women stand alone and look you squarely in the eye. A favorite of mine is the Milanese woman who stood defiantly in an archway above Porta Tosa—one of the eleven medieval entrances into Milan—which was renamed Porta Vittoria in the 19th century. That is, until she was removed to save her modesty or that of those who gazed on her. She now resides at the Sforza Castle Museum of Ancient Art in Milan.

Her dress indicates that she is a woman of status and wealth. Her hair is carefully braided, so she’s not disheveled or wanton. Around her neck is a dramatic jewelry cross, a symbol that she is Christian and therefore part of the societal mainstream; she is not a hag or harridan from mythology. Her gaze is direct. In her right hand is a large knife, held above her mons pubis. Her gesture is defiant, perhaps a warning to those entering the city through the gate. Academia cannot be sure of her mission—a legend says that in 1162, during one of Barbarossa’s many sieges of the city, a young Milanese woman climbed the ramparts and, in an act designed to humiliate the enemy army, exposed herself. Another story suggests she was placed there as an insult, above the eastern- most gate of the city and facing Constantinople, whose Empress

There are more than 100 medieval Sheela-na-gig or vulva-display carvings in Britain alone, many of them still on the walls of churches and castles. Some are positioned for all the world to see, while others are high up, speaking only to the elements. There used to be more, but over time, as society became increasingly anxious about representations of woman’s sexual anatomy, they were removed or their lower bodies were chiseled or smashed off.

The medieval Sheela-na-gig carvings draw on a much earlier tradition. Plutarch tells a story about the bravery of the Persian women who raised their skirts to expose their naked vulvas, goading their own retreating army to re-enter the battle they were fleeing from. The Persian soldiers returned to the battle reinvigorated and emerged victorious.192 The vulva display is presented as a gesture that brings shame on the retreating soldiers. Plutarch’s story is the fifth in his series of anecdotes describing the bravery of women, and there is not a hint of any immodesty or of embarrassment about their actions. This moment is portrayed in the old master paint- ings Bravery of the Persian Women and Persian Women, by the Flemish painters Frans Francken the Younger and Otto van Veen respectively.

In Greek mythology, the invincible hero, Bellerophon— tamer of Pegasus the winged horse, slayer of the monstrous Chimera, conqueror of the Amazons, and friend of Poseidon, god of the sea—is thwarted in his attempt to take the city of Xanthos by a wall of women similarly exposing themselves. The sight of their vulvas forces back the waves, terrifies the flying horse, and shames the poor guy into retreat. The Irish sun god, Cuchulain, came a cropper in similar circumstances. Respect to the vulva! The Greeks even had a term for it, anasyrma, which literally translates as “skirt up.” The more recent incidents of “upskirting,” when boys and men have taken photos on their phones looking up unsuspecting women’s skirts, illustrate neatly how respect for the power of the vulva has declined over time.

Did these legends and myths about the innate power of the vulva to subdue or shame men contribute to the desire to cover her up? Maybe the men who defaced the lower torsos of the Sheela-na-gig statues were worried about being another Bellerophon or Cuchulain. Perhaps the graphic reminder of where they came from was too humbling for these men to contemplate.

I struggled at university with the writings of Julia Kristeva, but the treatment of the Sheela-na-gigs seems a perfect visual of the attempt “to keep a being who speaks to his God separated from the fecund mother.” She states that “[f]ear of the archaic mother turns out to be essentially fear of her generative power” and argues that it is this power that patrilineal societies seek to subdue.

Or did the statues trigger pornographic thoughts? Thoughts of a sexual nature, not of the power of birth. After all, strong men like Samson have been undone by lust. Whatever its reason, the damage to these carvings sent men and women a message about the vulva: that it was to be despised, hidden, or smashed off.

Excerpted from The Sweetest Venus: A History of The Clitoris by Sarah Chadwick

Sarah ​​Chadwick is a guest researcher at Chicago’s Loyola University, splits her life between the US and UK and has four children. She has been described as “an articulate and compassionate spokeswoman for a new generation of women, commended for her exceptional research, kindness, and candor.” Join her on Instagram @its.personalgirls