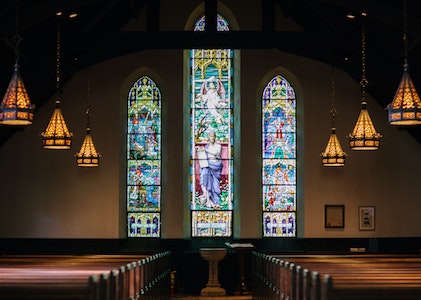 I was raised Roman Catholic in an immigrant enclave on the south side of Chicago. When I left the church decades later, I realized that I actually wasn’t raised Catholic at all.

Religion never exists in a vacuum, and for the first generation born after Vatican II, there was lots of experimentation afoot. The Catholic Kool-Aid we thought we were drinking was more of a lush, handcrafted, artisanal cocktail: Combine two ounces of 60s counterculture, a shot of Daniel Berrigan-style anti-war radicalism, stir in six verses of “Kumbaya” on the acoustic guitar, strain out any information whatsoever about sex, and garnish with the 1972 Helen Reddy anthem “I Am Woman.” This last ingredient came courtesy of the forward-thinking nuns at my all-girls Catholic high school, who started giving sermons at school masses in the 1980s when you could get in serious trouble for that kind of thing. (Correction, 40 years later, you can still get in serious trouble for that kind of thing.)

I am Irish-American, the tenth of eleven kids. When my older siblings were all in school, my mom started taking me to daily mass with her. When it comes to indoctrination, there’s nothing like exposing a toddler to an intoxicating haze of stained glass and incense and singing and bloody death and miraculous resurrection and cross-dressing men. Our brand of Irish Catholicism wasn’t only a religion, it was identity and culture and even geography: When you met someone new, you’d ask what parish they lived in, instead of what street or neighborhood.

My mother offered a single elegant solution to skinned knees and the awkwardness of puberty and sibling rivalry and bullies and depression and anxiety: Offer that shit up to Jesus. That’s an embellishment -- my mother is a saint and I’ve never heard her curse even once in her 88 years. Even sunk deep in dementia she is unfailingly kind and recites the rosary daily with Mother Angelica on EWTV. (Watch it some time. Guaranteed to Freak. You. Out.) But Catholicism was pretty much the only therapy we had, and it turned out to be super helpful in navigating adolescent angst. During Lent my high school would hold 7:30am morning meetings where a dozen of us seriously nerdy girls sat on the floor in a carpeted space led by a hippie religion teacher and meditated (back then we called it praying). She would encourage us to talk about our feelings and recognize that we weren’t weirdos or rejects, God created us for a purpose, loved us as we were, and had a badass plan for our self-actualization. A decade before the Whoopie Goldberg movie Sister Act, our teacher played “Ain’t No Mountain High Enough” and told us it was about Jesus (“Just call my name and I’ll be there in a hurry/You don’t have to worry”). It was uniquely effective form of empowerment.

At college, I embraced the intellectual tradition of the Jesuits and attended a packed Sunday afternoon mass, where you’d sit your hungover butt next to a hot guy because the whole church would hold hands while praying the “Our Father.” I sang in the choir and went on EST-style retreats and continued to find spiritual communities that called themselves Catholic but bore minimal resemblance to the insular, bureaucratic institution in Rome. Even when I got to New York City, I found a parish where women preached, men did liturgical dance and gay Catholics congregated -- until the archdiocese found out and shut it all down.

While working as a reporter, I went to divinity school at night. I was more motivated by anger than faith: It pissed me off when people would quote the Bible to justify patriarchy, misogyny and homophobia, and I wanted to know what it said in Hebrew and Greek, in its historical, socio-political context. My classmates were mostly ministers helping drug addicts and homeless people in the city’s poorest neighborhoods, and I was awed by their faith. But the experience essentially marked the beginning of the end of my religion. While the Bible has inspiring things to say about loving your neighbor and caring for the marginalized, it also has plenty of patriarchal, misogynistic and homophobic content reflecting the cultural constructs of thousands of years ago. (Here’s a little appetizer from Exodus 21:7-9: “When a man sells his daughter as a slave, she will not be freed at the end of six years as the men are. If she does not satisfy her owner, he must allow her to be bought back again. But he is not allowed to sell her to foreigners…”)

Even as I studied the languages and delved into the historical context, as a woman, feminist and eventually mother of three daughters, the words themselves became harder and harder to tolerate. An older sibling, who left the church about three seconds after she moved out of my parents’ home, didn’t understand how a feminist who supported legalized abortion and birth control and LGBTQ rights could go to church.

I guess for me it had always been about the people, and I viewed the institution as something I could change. I raised my kids in the church, all the way through the sacrament of confirmation, hoping to give them the ethical values, spiritual solace, philosophical enrichment and sense of community I felt in my youth. Through my 30s and 40s, working full-time, raising kids and navigating marriage, job loss, family illness, my father’s death, and my mother’s slow slide out of reality, I genuinely leaned on prayer. I also embraced the Biblical theology of kenosis – κένωσις in the Greek: The 'self-emptying' of one’s own will to become entirely receptive to God’s divine will. I thought that suffering and sacrifice would ultimately be redemptive.

But that theology can be insidious for women in a number of ways. In my case, it made me tolerant of some dysfunctional situations when I should have pushed back. Over the years, the ranks of my hippie Catholics grew thinner and thinner and I found myself an oddball in a flock of mostly hard-core sheep. I was sickened by the church’s ongoing sex-abuse scandals and corruption and hypocrisy. I learned that one of my closest friends from high school had been abused by a priest and came close to suicide as an adult. The final straw came from my daughter, a student of both science and philosophy, who said, “Mom, every time you walk in those doors, you’re supporting an institution that represents patriarchy, misogyny and homophobia.”

From the mouths of babes. That was the last time I went.

Losing my religion hasn’t been as hard as I thought. I suppose I miss those moments of communal transcendence, which are hard to come by in the secular realm. (I’m not a Grateful Dead or Phish fan and have no interest in ayahuasca retreats; three pregnancies, nine collective months of morning sickness -- major aversion to vomiting.) I’m still a seeker, but I find my community elsewhere. In friends and writers mainly – women who’ve navigated the craziness of the last half-century and share their hilarious don’t-give-a-shit-anymore wisdom; and the young ones, like my daughters, who inspire me with their we’re-not-putting-up-with this-shit-anymore ambition. It’s a lush, handcrafted, artisanal cocktail of believers in the power of our shared humanity, and I’m #blessed.

Laura Rowley is a writer and the author of six books.
Email: [email protected]
Twitter: laurarowleyny