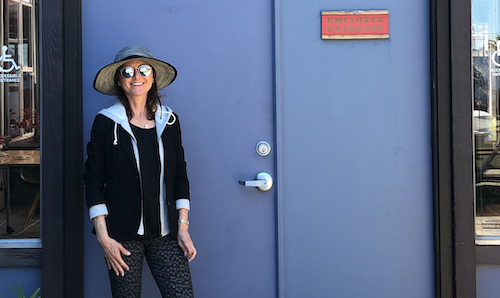 Lauren Beller and her husband had lived in the same house outside New York City for 26 years before deciding to pack their things and move to San Francisco a year ago. Both her kids – ages 23 and 27 – had relocated to the West Coast, and Lauren knew she wanted to stay close to them. With her husband working in cryptocurrency, job prospects in Silicon Valley weren’t a problem. But Lauren knew she’d also need to find a new community – for support, friendship, and socializing. That’s what led her to Revel.

“I’m super outgoing,” says Lauren, who is 55. “I need to fill my time and I like to meet other women who are going through the same thing – who can talk about being a mother-in-law, or about menopause.”

She says that every Revel event has expanded her circle of women in the area, and helped her feel more connected and socially independent. “I’ve met super interesting women,” Lauren says. “Every woman has a story to tell and everyone is supportive of your story.” Lauren hosted the recent book discussion with Hillary and Chelsea Clinton, and movie outings, and she attended a printmaking class, even though arts and crafts is, she admits, “not my bailiwick.” But she liked having the opportunity to try something new. “Because there is something you are all doing that you can focus on, it’s not awkward,” Lauren says.  “There’s a leader and a planned activity – for women who may be more introverted, it’s a comfortable environment.”

Through Revel, she’s connected with a number of women who have also moved to the Bay Area in their fifties and beyond. “Many have relocated to California because of their adult children,” Lauren says. “Like us, they realized that their kids are not coming back, and it made sense to move. But many of them say it’s been hard because they left close friends behind.”

One of the advantages of Revel, says Lauren, is that it allows her to immediately find women with something in common – they are all in similar life stages, and can have more meaningful conversations. She mentions that she’s connected with Revel members for advice on how to navigate relocating for children but not crowding them. “We talked about wanting our own local places, and how to build our own lives,” Lauren says.

Revel members are actively creating the community they want, Lauren says, which is exciting. “We choose what we are involved with and we have the power to build this community,” she says. “And our events help give other women an economic boost.”