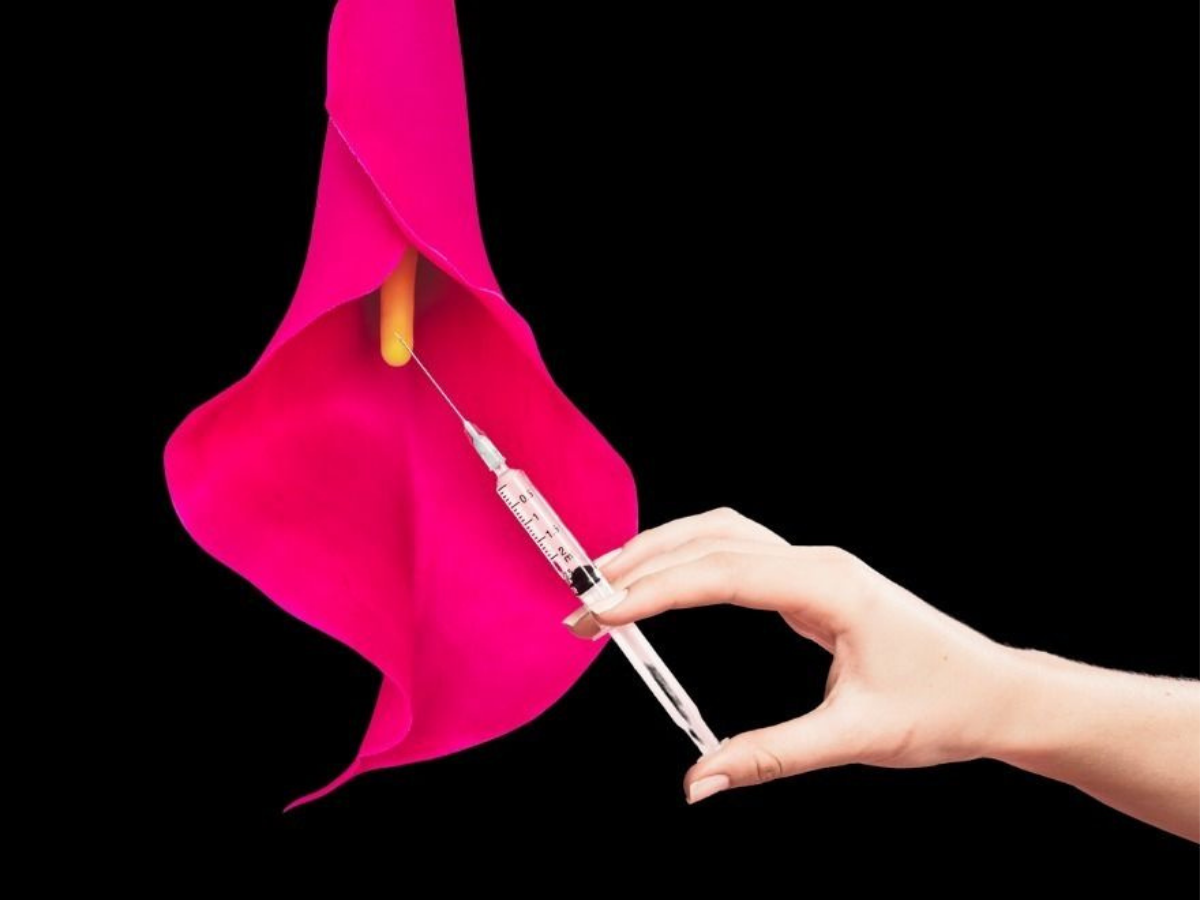 As women get older and our estrogen plummets, the skin inside our ladyparts gets thinner.

I capitulated. Inject me.

Over the years, as the leader of a community devoted to women’s health, I’ve oft heard mention of something called The O-Shot (also sometimes known as the PRP Intimacy Injection) but dismissed it as urban myth, something not to be taken seriously. It falls under the slightly suspect (for women who don’t think aging is an illness) category of “vaginal rejuvenation,” and most women like to think that our vaginas are just fine, thank you very much.

That said, atrophy is real. As women get older and our estrogen plummets, the skin inside our ladyparts gets thinner, and drier. It just does. The lucky few don’t even notice. For the most afflicted, this can make sex unbearably painful, untenable even. The clitoris also tends to shrink with age. It never disappears (don’t panic!), but it’s not uncommon for it to become smaller, thus affecting orgasm in potentially disappointing ways. Some women start to report more difficulty reaching orgasms, or a diminished quality of orgasm, and scientists suggest that this may be caused by decreased genital blood flow (similar to that seen in erectile dysfunction in men) and/or diminished nerve conduction (also seen in ED). The vast majority of menopausal women cope with all these issues using a combination of lubricants (we love Uberlube!), topical estrogen, sometimes HRT,  the always beloved coconut oil up the cooch, toys, erotica, etc, but we're always looking for better solutions. After all, we know well that sexual health plays a vital role in mental health and overall well-being.

Enter the idea of PRP! Platelet-rich plasma is the substance in your blood that contains healing proteins called growth factors, and PRP injections are now considered a natural way to stimulate healing in the body. They work locally, meaning the injection must be administered directly to the area that has been injured or is experiencing chronic pain and they're often used (successfully, I might add, particularly with arthritic knees) in orthopedic settings.  Since PRP activates cells to develop into new tissue — nerves, collagen, and blood vessels — it seems logical to at least consider that PRP injected into the clitoris and the vaginal wall might improve sexual function in women by potentially improving blood flow through both the clitoris and the tissue around the urethra. Furthermore, we also know that women who easily achieve orgasm are more likely than women who don’t to have a larger clitoris and a clitoris positioned closer to the vaginal wall. Since PRP has been shown to increase connective tissue, maybe an injection of PRP into the clit could enlarge the clitoris and even bring it closer to the vaginal wall, thereby improving orgasm? All worth exploring, right?

For the record, my orgasms seem fine. Maybe a tad more elusive since menopause, but still readily available and plenty strong. That said, could they be stronger? Dr. Susan Hardwick-Smith, a menopause expert in Houston, Texas, told me that she won’t go without her regular (at least twice a year) O-shot. She says “brushing up against a man in Starbucks turns me on now.” That sounds fun, right? So I figured I’d take one for the team and give it a go.
‍

On a rainy day in November, I went (masked) to a place called VSpot Medi-Spa on Madison Avenue, right across the street from the now-shuttered Barneys. I walked up two flights of slightly shabby stairs and found myself inside a tiny all-white quasi-medical looking apartment. Sort of like a railroad flat that had been converted to a vaginal rejuvenation temple. I was ushered into the smallest consulting room I’ve ever seen; seriously I’m sure it was a former broom closet, and there I had a consultation with a friendly young doctor, Dr. Grover. She was in her mid-thirties, and already double boarded in GYN and Primary Care. She told me that she has her own practice in Westchester, but works at VSpot two days a week. “Why?”I asked.

“I value a comprehensive approach to women’s health care and the full conversation about what each woman needs can’t really be had in a traditional medical practice. I work three days a week in a traditional practice and here two days a week offering women what I think are valuable services. It’s a doctor’s responsibility to open up these conversations.” Ok, I thought. Fair enough.

Dr. Grover went on to tell me that the O-Shot is their most common procedure (they steam vaginas, they tighten them, they wax them, they kegel you on a special throne) and that all the women in the office love it. Then she told me the price, and I almost fell off the examining table. $2500!? I started to gather my things, thanking her for the information and saying I would think about it. The doctor then excused herself, and in came the office manager, a lovely young woman in her twenties. She offered me a press discount if I agreed to write about it, and she gave me a hard sell, telling me how fabulous I’d feel afterward, so plump and ready for action. I said to her “How would you know anything about atrophy? You’re 12 if you’re a day!” I loved her response: “All women have trouble orgasming. The O-Spot is for everyone.”

I capitulated. Inject me.

The process was straightforward. They drew blood from my arm. They spun the blood in a centrifuge and while they were doing that the PA slathered me with lidocaine. Then the doctor came back in and injected me a few times, at least once directly into my clitoris and once or twice on the inner, upper wall of my vagina, the rough area of the “G-spot.” The needle was about the size of a Botox needle, so small, and I experienced zero pain. And because the patient’s own plasma is utilized, it’s overall a very safe procedure.

Dr. Grover said that it takes 9-12 weeks for collagen synthesis to take place, which is why I waited til January to write up this report, and I hate to tell you that I’ve noticed no difference whatsoever. Nada. Nothing. No man at Starbucks is making me wet.

I’m going to take the cheerful approach here — nothing ventured, nothing gained — and trust that my orgasms are already so good that they can’t be improved upon. But I have to admit that since this procedure is neither FDA approved, nor covered by insurance, I’m as cynical as I ever was.

And by the way, there’s also a P-shot for penises, but that's a topic for another day.